Back at the pad

Today a few of us started the day with a much needed visit to a local coffee shop before heading back to the Mill House to update Lops tattoos … that needed reinking from the night before… this guy actually almost cried like a baby from all the vivids going back and forward on his skin haha. Toughen up Lops! Josh and Tarry then joined us and we briefed for the day ahead. We had some key pick ups that needed to be captured still from the night before so got stuck into them first.

We still have a number of scenes to film at the Pouakai headquarters, so thought it would be good to get the majority done tonight. Bas and the guys joined us there with their bikes again.

A few of us took some cool pictures with the bikes and Ariana even got to go for a ride on the back of Lawrence’s bike… which was pretty awesome! We started by filming the scene where Cruz arrives back at the gang headquarters and heads in to see Axe. Wayne did a great job of riding a Harley in.

Bas even got a wee bit of a cameo… well deserved! Here is a picture of him wearing his gang patch on his bike! Thanks for everything you have done to help us Bas, you are such a legend! We then moved onto filming Lops’s fight scene which was great fun. We thankfully managed to capture everything we needed just before the rain set in.

It was then time to officially wrap Lops, which was rather moving. Will really miss having that guy and his “baaaaaaas” on set!

It was now raining quite hard which meant that we weren’t able to film everything else we had hoped to capture on the night so we decided to head back to Mill House for dinner. It was so lovely to be able to warm up and defrost as it is absolutely freezing outside… it is the middle of winter. Michele had made us a delicious steak dinner which we all thoroughly enjoyed! After we had all eaten, Lops sung us all an impromptu farewell song which was quite moving … love you Lops!

The majority of the crew stayed home to get some rest while a few of us decided it would be good to get the scenes outside the gym finished now that the rain had stopped. We picked up Scotty’s truck in the middle of the night (sorry mate) and then went to film the scene outside the gym. Michele met us out onsite with some warm pudding which was just incredible and it gave us the energy to finish everything that needed to be finished.

This was meant to be Wayne’s last day down with us but he decided that he would like to stay longer and be a part of the crew. So cool! 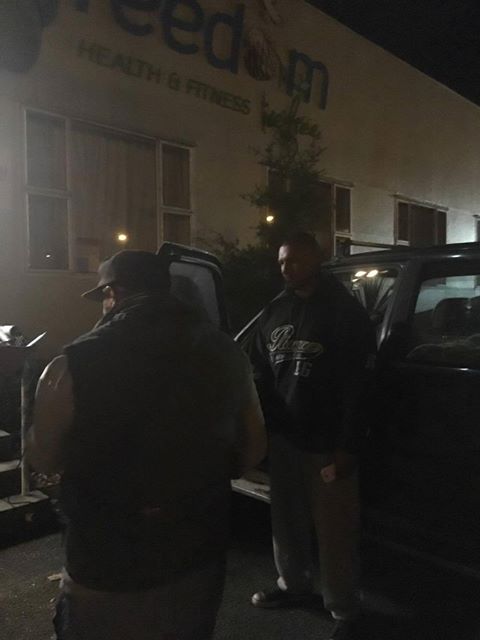