Filming in the Cemetery

In the film, Wayne’s character Cruz goes to talk to his father at his grave site, so out of respect we couldn’t use a real grave so had to create a really realistic one, on a budget.

Tarry came up with the fantastic idea of getting vinyl to lay over a headstone.

So we borrowed a headstone that had been engraved incorrectly on the back and then added our vinyl to the other side.

This was a really nerve-racking process as we really had only one shot at this. The stone is so heavy that it takes two guys to move it! Tarry employed Michele to help him steady the vinyl and together, they carefully laid it down. The result was incredibly realistic! Check this out … how real does that look!? Looks pretty awesome. So we set up ready to film the morning cemetery scene first using the evening golden hour light to act as morning. We were really racing against the sun here and unfortunately had to simulate it a bit with one of our lights. It still works because there is last light being cast over the cemetery thankfully. We were thrilled that Bas and his boys were keen to come again with their bikes for this scene. Don’t they look awesome! Lops had told us that he was able to ride a motorbike but in the end provided us with so much entertainment as he fumbled his way in and out of the shot.

Stu came up with a fantastic idea to print a number plate on the number plate of his car so that it said “poukai”… It is not quite the right spelling but tied the car into the world perfectly. Such a good idea!

We then wrapped the guys and their bikes and then moved into filming the night scene. With the haze machine going the cemetery looked quite moody and creepy… check this out! Here is Ryan our behind the scenes cameraman sitting on the machine to make sure that the haze was directed in the right direction… toughest job on set! 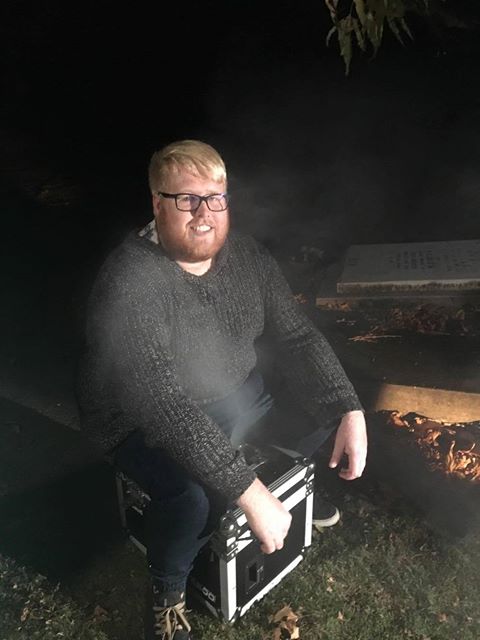 Wayne did a fantastic job tonight and we were all very pleased after the shoot to come back into the warmth of Mill house for some delicious pudding … thanks Michele!