Getting Creative with our shots

Thanks Michele for feeding us all this morning after a huge night last night. 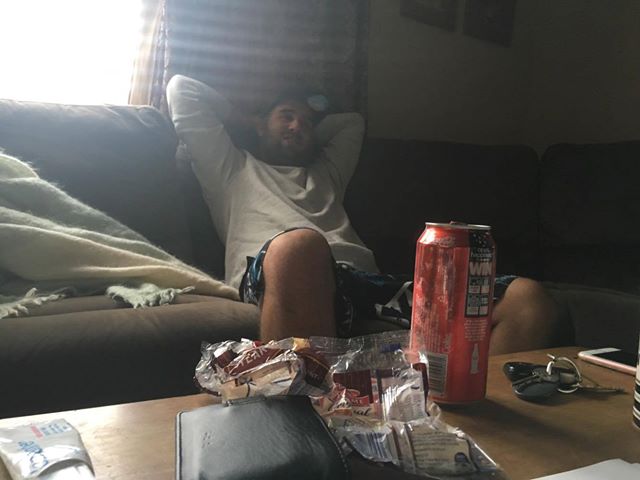 Still amazed that this guy can have two pies and a coke BEFORE breakfast! Anyway, after a great breakfast we did some more planning throughout the morning before heading over to Fred Tate Wools to film again.

Spent time capturing one of the coolest ad lib shots in the movie which would have looked amazing on a steadycam (Ant, we really missed you so much!).  Josh shot it off the shoulder which works with the raw and rough feel we are going for. We had guys perfectly positioned with their cars, fixing bikes, chatting etc to really create a wider feel of the world they are in.  Thanks Bas, Kyle, Lawrence, Kim and Stu for coming out again you guys are such legends.

We also had Sammi’s brother in law Paul visit us on set and drop us off some very well received pizzas! Paul and the Smith family also donated a whole lot of soups and sachets etc which Michele has put to good use throughout the shoot. The guys had a great time, here is Kim and Bas with their bikes. We wrapped our extras at a reasonable hour and then started to set up to film more of our office scenes. We got some fantastic footage tonight. Wayne surprised us with a couple of cool tricks.

Josh and Tarry got rather creative with the shooting (pretty impressive considering their lack of sleep) Check them out filming through a window here…. It was a great night and it definitely felt awesome to finally wrap the office scenes. Great job Wayne and Lops … massive couple of nights for you both!