We are really back into things now and our awesome stunt coordinator Augie has joined the madness! Welcome! Here is a photo of some serious planning underway. Tonight we are filming the first of our Pouakai gang scenes and have a really exciting fight scene planned! JD is going to get pummelled tonight… here he is relaxing in the calm before the storm getting his tattoos done. 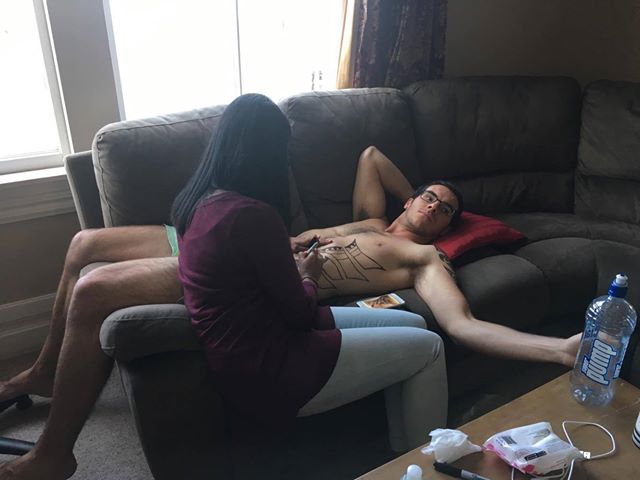 We arrived at the Pouakai headquarters (aka Fred Tate Wools shed) to realise that where we had organised to film in, was actually where they keep all the sheep poos. So before we could film in there we had to sweep and clear it all out… and then dress the set. As we swept we kicked up sheep poo dust absolutely everywhere. It was all in our hair, all over our clothes and definitely up our noses… the smell is what won’t be translated across camera. It was great… yeah, good times. Here Tarry is getting stuck in. It was then time for some rehearsing before all our extras were to turn up. Poor Lops and JD had practiced their fight scene on cushy mats but now they were right in the thick of it… sheep poo that is. They had to fight all through the poo and on the concrete floor! Such troupers! Here is Augie giving them some direction. This was such a great night as we met so many amazing guys who volunteered their time to come be extras in the scene.

As night fell and once all the guys were full of sausage rolls and quiche, we started filming. This was probably one of the most memorable nights on set. The whole shed was packed and the atmosphere electric. We received a lot of gang advice on the night… so hopefully it will look pretty good!

Here are a few of the cast members hanging on set The initiation is about to begin. Bas looking cool with his bike.